From this page, you can access open results from Andrea Tonello’s research. This is to follow the spirit of replicable research and open software.

PLC channel modeling can be classified in:

Bottom-up channel modeling refers to an approach where the channel impulse/frequency response is obtained via the application of transmission line (TL) theory to a specified network topology, cables and loads characteristics. Conventionally, this approach is applied to obtain a specific response and it is also referred to as deterministic model. Further, for complex networks the existing calculation methods are rather complex. We have extended this idea in order to obtain an accurate statistical channel generator. This has been obtained by developing a realistic statistical description of in-home topologies. To overcome the computational effort in obtaining the channel responses, we have devised an efficient method for the computation of the channel transfer function. Some results about our bottom-up channel model can be found in [1]-[6]. The bottom-up simulator can be used for testing algorithms that require topology information. An example is network cooperative and relay protocols (see for instance [7]).

The developed bottom-up channel generator is available from WiTiKee. It 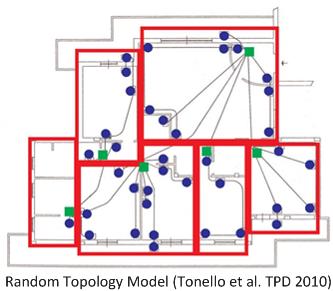 Top-down channel modeling refers to an approach where the channel impulse/frequency response is obtained with a parametric model with parameters obtained by fitting real data from measurements. The statistical top-down model allows generating channels with statistics identical to those exhibited by real channels. In particular, the model is simple, flexible, and it uses a small set of parameters. The parameters can be adjusted to generate channel according to a certain statistical class. For instance, we can classify channels according to their average path-loss, gain, delay spread, and capacity.

The idea of statistical top-down modeling was originally presented in [1]. Other details and improved versions can be found in [2]-[4].

This software is freely usable for non commercial activities provided that [1] and [4] are cited and this web link is reported. Any use has to comply with the copyright terms. Any modification and/or commercial use has to be authorized by the copyright owner. 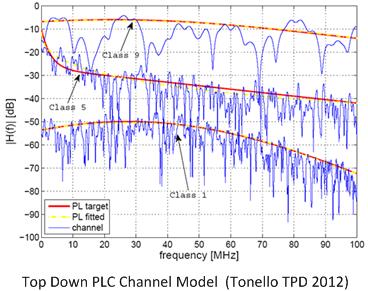 This is a phenomenological PLC statistical channel model that models directly the statistics of the channel frequency response. The model was presented in the papers below: [1] considers the SISO case; [2-3] report preliminary ideas to extend it to the MIMO case; [4] derives the final and improved fully synthetic model.

A data base of 100 MIMO channel responses in the band 1-100 MHz generated according to [3] is available below.  It consists of a Matlab data structure. A Matlab function is also available. It allows to generate an arbitrary number of MIMO channels (according to [4]) from 1 x 1 up to 2 x 3 modes. Channels are statistically equivalent to those obtained from the ETSI Task Force 410 measurement campaign in Europe. The help function provides details on the script.

The data base is freely usable for non commercial use provided that [1], [4] are referenced and this web link is reported. 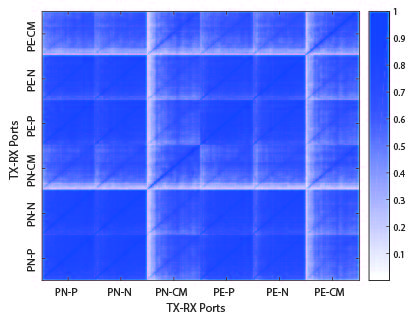 Following the ideas developed in the  synthetic channel modeling approach, a generator using GANs has been developed. This modeling and generation approach was presented in the papers [1]-[2] below.

The software is freely usable for non commercial use provided that [1], [2] are referenced and this web link is reported. 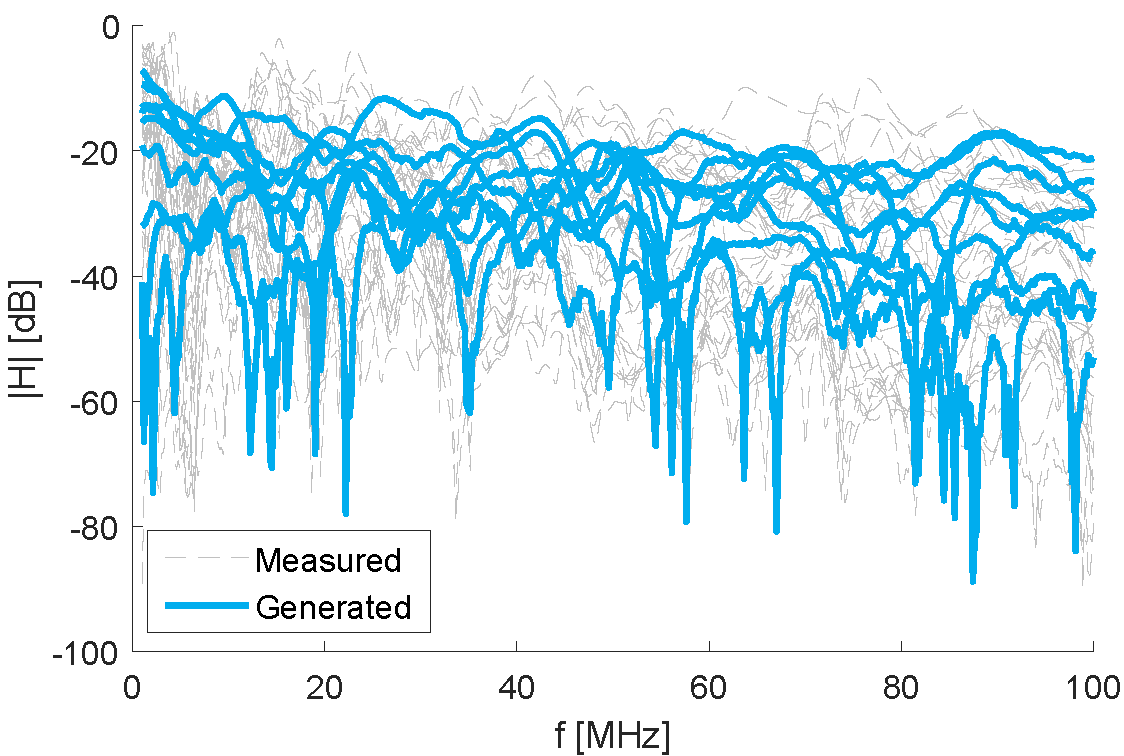 Channel measurements are important to characterize the PLC channel. We have developed both measurement methodologies and statistical analysis tools.

New results about the characterization of the in-home PLC channel can be found in [1].

A Matlab code (Release 1.0) to analyse data according to [1] can be downloaded at the link below. The script computes the channel impulse response (CIR), the average channel gain (ACG), the RMS delay spread, and the deterministic coherence bandwidth at level 0.9 of the channel frequency response H defined at frequencies f. For further details, see [1].

The software is freely usable provided that [1] is referenced.