There has been a tremendous growth of services and applications that exploit location information provided by positioning technology e.g. navigation systems, location aware communication services, monitoring and tracking of goods.

Global navigation is supported by satellite systems. Because they may not be sufficiently reliable and precise in certain situations, terrestrial radio localization technology becomes increasingly important. It offers precise positioning of nodes equipped with radio emitters which can be constructed ad-hoc or transmit data signals, e.g., WiFi or cellular, can be exploited opportunistically. A typical approach uses a number of base stations (anchors) at known positions and determines the position of the nodes via ranging measurements and trilateration. Another approach is based on the angle-of-arrival (AoA) estimation which co-locates the receiving antennas to form a 2D or 3D antenna array. “There are a number of applications of localization via AoA measurement that we are investigating: accurate positioning in indoor environments challenged by the severe multipath propagation for instance for the navigation of AGVs in warehouses, locating cars in safety critical situations, precise navigation of UAVs, tracking goods and assets,” Andrea Tonello says and adds, “We are interested in evaluating the performance limits introduced  by radio signal propagation and hardware impairments. For this, we have built hardware prototypes to test the technology. In 2003 we started with an EU exploratory project covering the use of ultra-wide-band (UWB) signals. Now we are focusing on the opportunistic exploitation of existing radio transmissions to save infrastructure costs. Furthermore, we are investigating the usage of massive MIMO arrays for positioning, which looks quite promising.”

A. Papaiz, A. M. Tonello: Azimuth and Elevation Dynamic Tracking of UAVs via 3-Axial ULA and Particle Filtering, Intern. Journal of Aerospace Engineering, 2016.

D. Inserra, A. M. Tonello: A Multiple Antenna Wireless Testbed for the Validation of DoA Estimation Algorithms, Intern. Journal of Electronics and Communications, 2014. 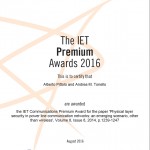 PLC Channel: from Grids to Cars